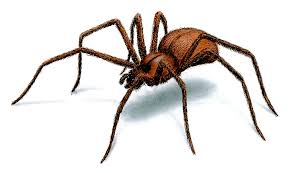 Spiders (order Araneae) are air-breathing arthropods that have eight legs and chelicerae with fangs that inject venom. They are the largest order of arachnids and rank seventh in total species diversity among all other groups of organisms. Spiders are found worldwide on every continent except for Antarctica, and have become established in nearly every habitat with the exception of air and sea colonization. As of 2008, approximately 40,000 spider species, and 109 families have been recorded by taxonomists.

Spiders are predators, mostly preying on insects and on other spiders, although a few large species also take birds and lizards. The venom of a few species are dangerous to humans. Spiders occur in a large range of sizes. The smallest, Patu digua from Colombia, are less than 0.37 mm (0.015 in) in body length. The largest and heaviest spiders occur among tarantulas, which can have body lengths up to 90 mm (3.5 in) and leg spans up to 250 mm (10 in). Females lay up to 3,000 eggs in one or more silk egg sacs and most spiders live for one to two years, although some tarantulas can live in captivity for over 20 years.