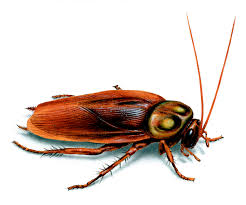 Cockroaches are insects of the order Blattaria or Blattodea, of which about 30 species out of 4,500 are associated with human habitations and are one of the most commonly noted household pests. Cockroaches are among the hardiest insects on the planet. Some species are capable of remaining active for a month without food and are able to survive on limited resources like the glue from the back of postage stamps. Some can go without air for 45 minutes. In one experiment, cockroaches were able to recover from being submerged underwater for half an hour.

Thus, cockroaches can exhibit emergent behavior, in which group or swarm behavior emerges from a simple set of individual interactions. They can also passively transport microbes on their body surfaces including those that are potentially dangerous to humans, particularly in environments such as hospitals. Cockroaches have been shown to be linked with allergic reactions in humans. One of the proteins that triggers allergic reactions has been identified as tropomyosin. These allergens have also been found to be linked with asthma.