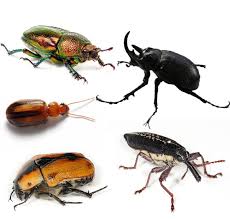 BEETLES Beetles are by far the largest orders of insects, with 350,000–400,000 species in four suborders (Adephaga, Archostemata, Myxophaga, and Polyphaga), making up about 40% of all insect species. The diversity of beetles is very wide. They are found in all major habitats, except marine and the polar regions. They have many classes of ecological effects; there are particular species that are adapted to practically every kind of diet.

Some are predatory, usually on other invertebrates; some are parasites or parasitoids. Many of the predatory species are important controls of agricultural pests. For example, beetles in the family Coccinellidae (“ladybirds” or “ladybugs”) consume aphids, scale insects, thrips, and other plant-sucking insects that damage crops. Besides being abundant and varied, beetles are able to exploit the wide diversity of food sources available in their many habitats. Some are omnivores, eating both plants and animals.

Other beetles are highly specialized in their diet. Many species of leaf beetles, longhorn beetles, and weevils are very host-specific, feeding on only a single species of plant. Ground beetles and rove beetles (family Staphylinidae), among others, are primarily carnivorous and will catch and consume many other arthropods and small prey, such as earthworms and snails. While most predatory beetles are generalists, a few species have more specific prey requirements or preferences. About 3⁄4 of beetle species are phytophagous in both the larval and adult stages, living in or on plants, wood, fungi, and a variety of stored products, including cereals, tobacco, and dried fruits. Because many of these plants are important for agriculture, forestry, and the household, the beetle can be considered a pest. Some of these species cause significant damage.

Meadow Vole (Microtus pennsylvanicus), sometimes called the Field Mouse or Meadow Mouse, is active year-round, usually at night. It also digs underground burrows where it stores food for the winter. It can cause damage to fruit trees, garden plants and commercial grain crops.